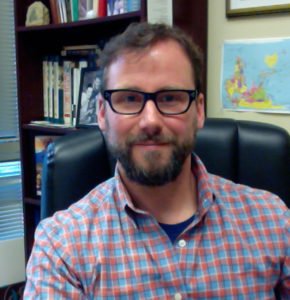 Bill Driscoll was born and raised in Pittsburgh, PA, and graduated from The College of William and Mary in Virginia in 1991. During college Bill met his wife Kim, and they were married during their senior year. Bill worked for an eyeglass manufacturing company for 14 years, during which time their four children were born. While working full time, Bill participated in lay ministry as a Sunday school teacher, in a businessmen’s Bible study, and with Fellowship of Companies for Christ. In March of 2005, Bill and Kim sensed the Lord leading them to step away from the optical business to follow Him in a new adventure. The Lord confirmed later that spring that Bill was to go to seminary and to pursue ordination in the Anglican Church; he graduated from Trinity School for Ministry in 2008 and was ordained later that year. Bill and his family moved to Jacksonville in July of 2008, to serve as the Assistant Rector here at Church of the Redeemer. After Neil Lebhar’s election as Bishop of our diocese in late 2009, Redeemer’s Vestry called Bill to serve as Rector. He was installed as the 9th rector of Church of the Redeemer in March 2010. In his free time, Bill enjoys running, playing golf, and working in the garden with Kim and the kids.